Charles Rochussen (1814 – 1894) was a 19th-century painter from Rotterdam, who was also known as an illustrator and printmaker. As a boy he showed a talent for drawing, however, it was decided that he would pursue a career in business. He worked for a few years in an office before resolving at the age of 22 to turn to painting. His speciality was history painting. Do you ever see one of his paintings in a museum?

Julia de Gruijter (1887-1967) was a famous actress, decorated by the king of Belgium, buried in Amsterdam and today completely forgotten. Let’s give her an audience again.

Bernard Blommers (1845 – 1914) was a Dutch painter. He mainly painted genre works depicting fishermen and their wives. His work was critically successful during his lifetime, being sought after by English, Scottish and American collectors. Now he is all but forgotten.

Johan Werumeus Buning (1891 – 1958) was a Dutch poet and writer. He published 18 volumes of poetry. His most famous line was ‘Maar de boer, hij ploegde voort’. During World War II he joint the Reichskulturkammer (a Nazi organisation) which led to a two year publication ban after the war. Who reads his poems nowadays?

How do you show temporary, site-specific art years later in a RETROSPECTIVE?

Harmen de Hoop re-created works in Rotterdam that were made anonymously and without permission in other cities.

The question is: in what way does a new location and a different context change the meaning of the work? 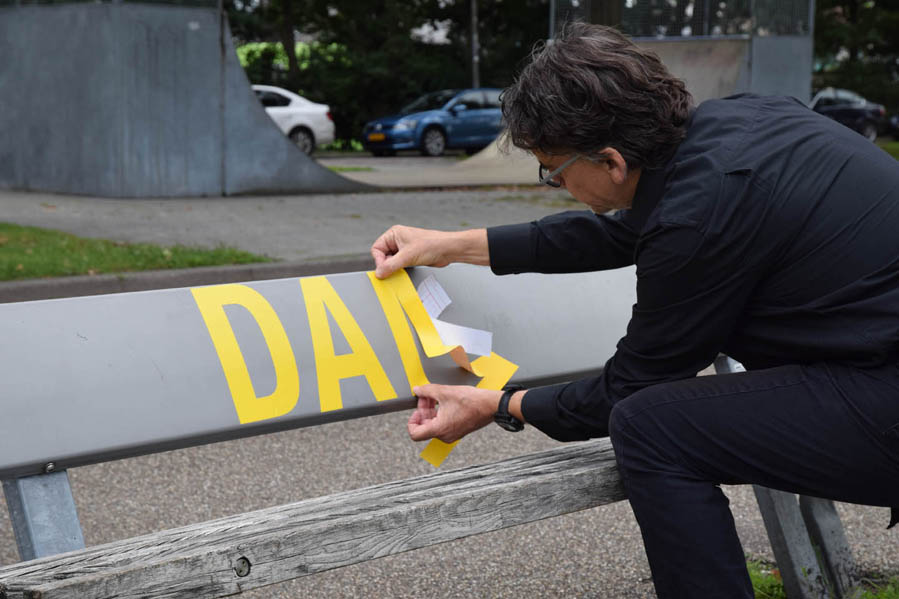 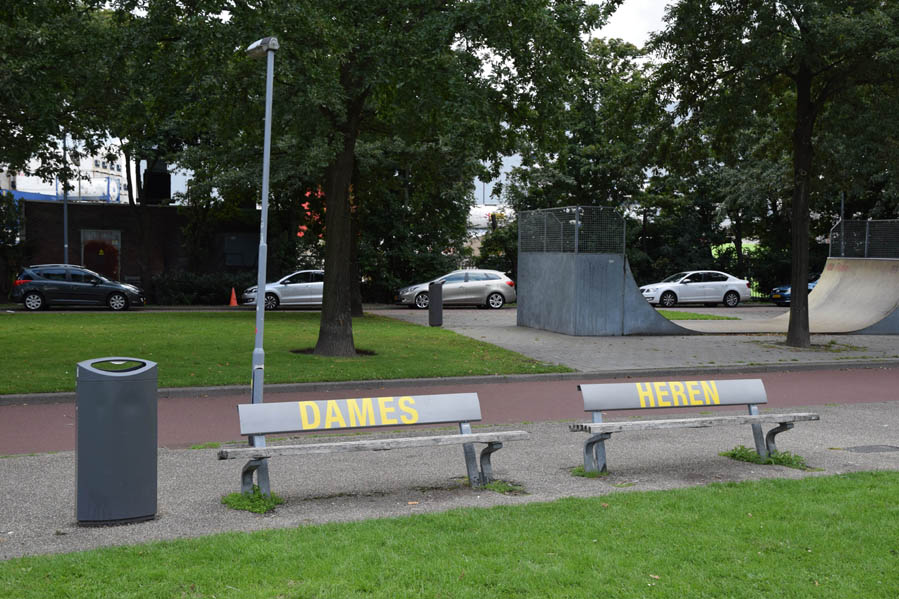 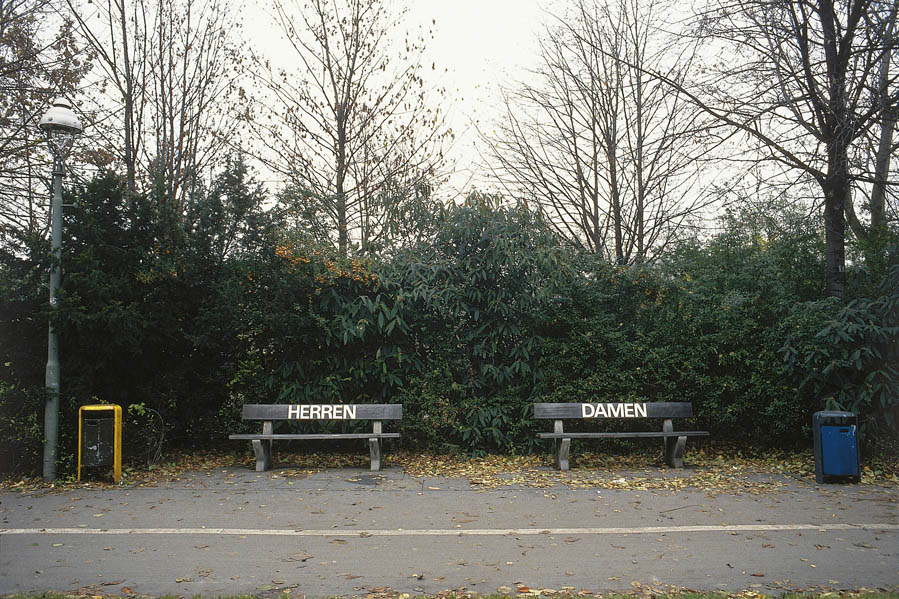 Executed 24 years later and in another city. What are the significant shifts in meaning? In Berlin, the work hinted at the post-war guilt about the division of people into groups. And it raised the question of how law-abiding the ‘Ossies’ and ‘Wessies’ were in 1993. Re-created in 2017 in Rotterdam-South, one might think it has to do with an Islamic division of men and women. Or is it symbolic that this time the women are mentioned first, and not the men? Is feminism doing well in our globalized world? Perhaps we should also take the discussion about gender-neutral toilets into consideration. Are these gender-neutral benches in public space a positive thing or will the sexual harassment of women decline if we install more gender-specific benches? 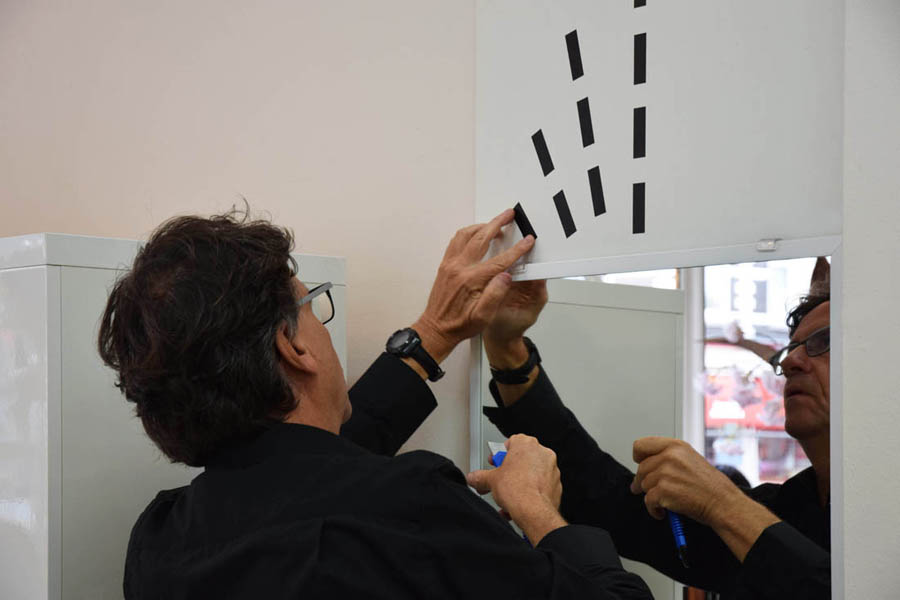 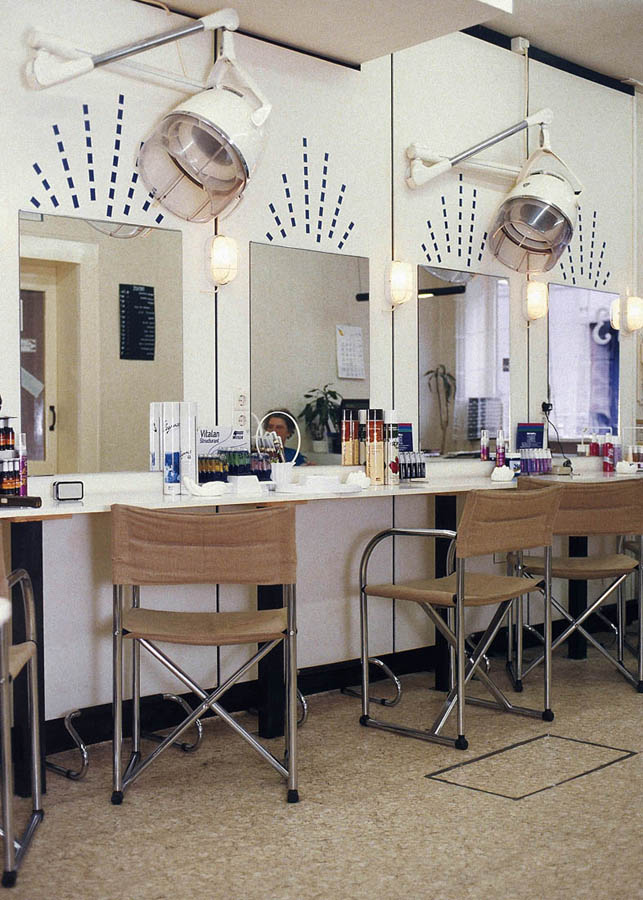 Once again, ‘rays of light’ were placed above the mirrors of a ladies’ hairdresser. What is the difference between Amsterdam in 1987 and Rotterdam in 2017? At Dameskapsalon Elise in Amsterdam, the clientele consisted of white women of a certain age, who had their hair done almost every week. Not because it was necessary, but because they liked the attention, the fingers running through their hair. Angel Cuts in Rotterdam is also a salon for ladies only. But the differences could not be greater: here young, colored women are taken care of by top stylists (according to their website). The aim is to be glamorous, night and day. Who needs to be ‘crowned with radiance’ most? The old ladies in Amsterdam or the young women in Rotterdam? Age or skin color, does it matter? Do we not all crave attention? 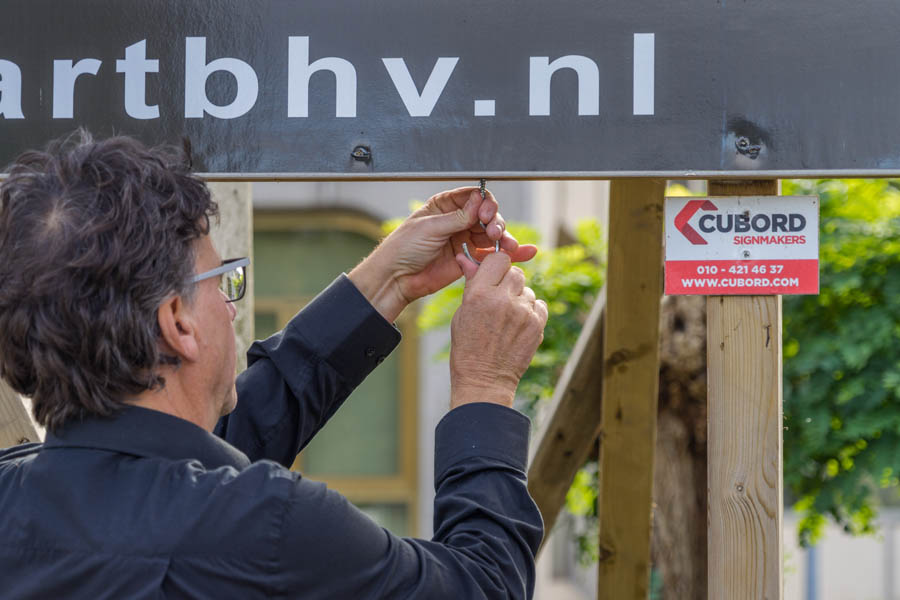 On the outskirts of Saint-Laurent-de-Neste I spotted a bulletin board used by the residents to communicate to each other. The garden tools I added seem to call for a joint maintenance of the public green areas. Did anyone respond? And did they return the tools afterwards? I do not know what the social norms and values were in 1997 in this 900-year-old village. And I also do not know whether they have changed since then.

In 2017 I added a similar set of garden tools to a billboard in front of an empty office complex in Rotterdam. Which potential user is being addressed here? The dismissed employee who is advised to take up a new hobby? Or is the focus a new employer who can offer his employees the benefit of some relaxing gardening? Or maybe these offices are no longer necessary and the city can decide to extend that small piece of greenery to a fully-fledged park after the demolition of the buildings? Options enough. Now we just have to wait and see what happens to the garden tools… Broad-leaf trees at Walvis Bay, Namibia. Planted by the white citizens. Was it a custom that they, either conciously or not, took with them from their home countries? The black citizens had no gardens; they understood that almost nothing grows on desert soil. It reminded me of something I saw in Israel. There, on similar desert-like soil, patches of grass were planted between most roads. Grass that had to be watered constantly, while at the same time the Palestinian territories were going through a water-shortage. Was making the environment look European the only way they could feel at home?
There are three palm trees on the Rijnhoutplein in Rotterdam. Who put them there? The municipality? Was it a clumsy, but well-meaning attempt to make immigrants from southern countries feel more at home? Or is it simply a result of globalization, where we copy anything from anywhere, making everything look alike? But isn’t it too wet in the Netherlands for these palm trees? What are the odds of their survival? 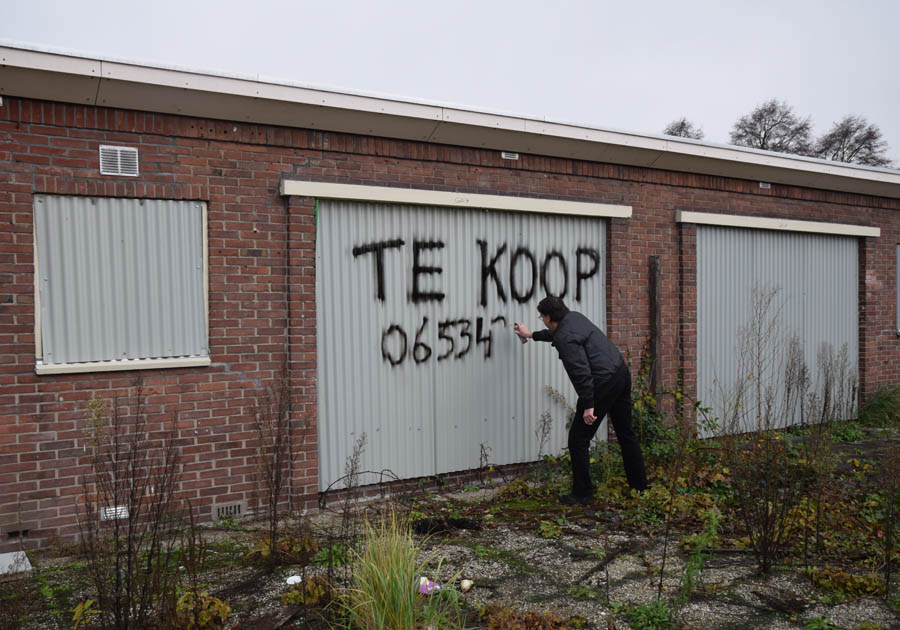 What is the most important thing in life? Money? In a scene I staged in Surinam, a man tried to sell a rusty, overgrown car. That was not as absurd as it seems. Everywhere in Paramaribo cars much like this one were put up for sale. Probably as a valuable source of spare parts. But when does something stop being a sellable commodity? Do we give up too easily in Holland? I try to make some money myself by selling a house in Rotterdam in the Wielewaal neighbourhood. Built in 1949 to reduce the housing shortage after the Second World War and meant to last for just 25 years, now the residents and the housing association argue about preservation or demolition. In the meantime I put a house (I do not own) up for sale. I have to make a living too, don’t I? Any takers? 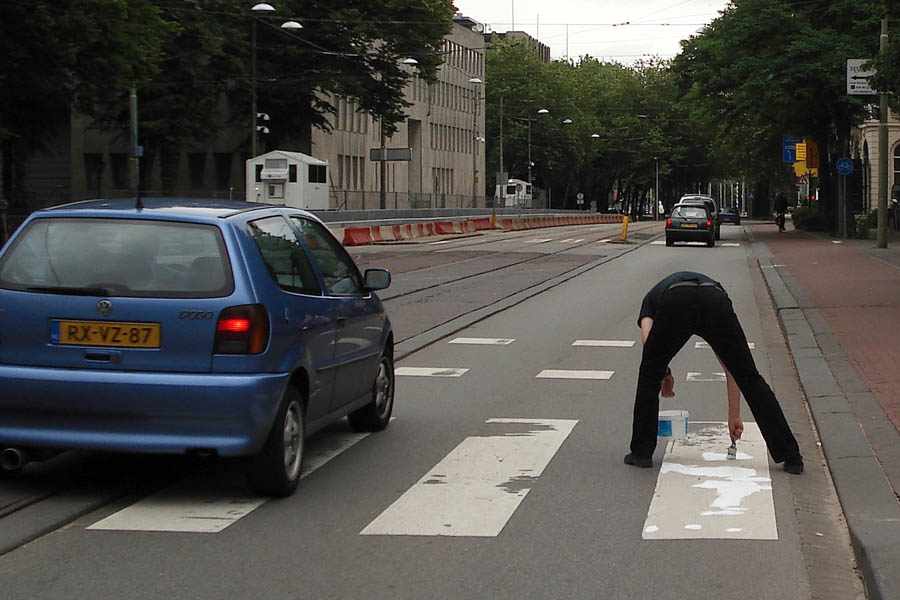 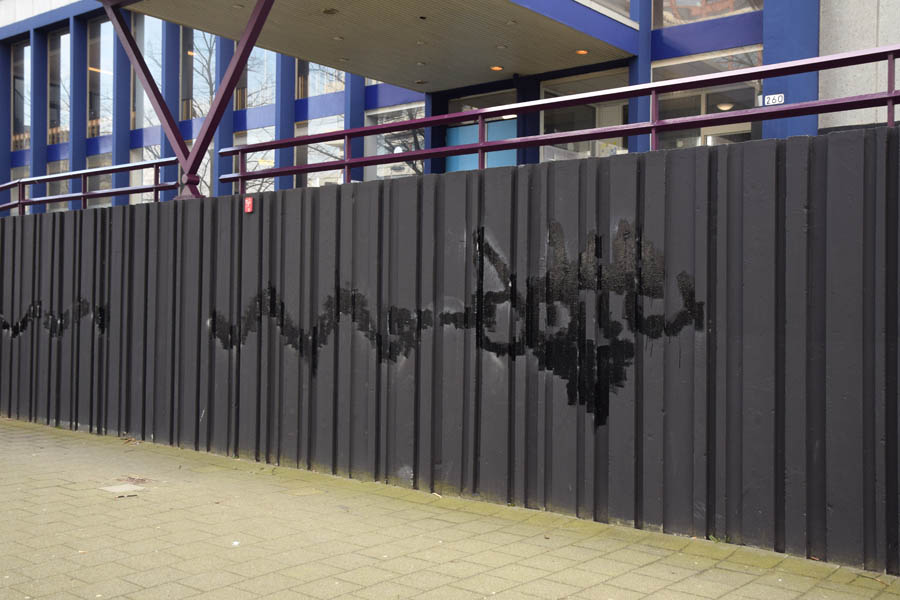 Should art be useful? Are we tired of beautiful paintings and do we think that artists should contribute more directly to a better world? Does holding up a mirror to society no longer suffice? Is decisive action needed? If you see a worn out pedestrian crossing, is the right course of action to take up a brush? Should we fight not only material, but also societal deterioration? It is said that graffiti, economic instability and social discontent are intricately connected, and that keeping the environment clean and removing graffiti will prevent further decay. But isn’t that merely treating the symptoms, while the underlying causes are not adressed? Whose side is the artist on anyway?